One characteristic for life is that every living thing has its own metabolism. Material is taken up from the surroundings, chemically changed and released in a different form to produce energy or build different biologically active compounds. Knowledge about the metabolic pathways can for example help describing diseases in humans or reveal how to get rid of unwanted bacteria.
In cells metabolism is a complex network of thousands of molecules and their reactions with each other.

Take the example from the figure where the side chains of a molecule are changed allowing for different functions in combination with other molecules. From this description we can extract how the molecule states can be produced in the first place, how much of it gets produced under certain starting conditions and manipulation of which other compound has the biggest effect on their production. 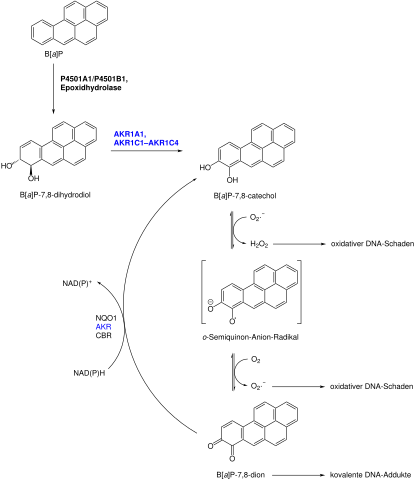 Take the simplified system where A produces C via the intermediate B. The reactions from A to B and from B to C happen at rates k1=0.05 and k2=0.7 respectively: Both are reversable with rates k–1=0.005 and k–2=0.4. Starting concentration of all compounds is 2.

For each of the concentrations of the molecules A, B and C find the correct line in the graph. Tip: compare the forwards and backwards constants for each reaction. 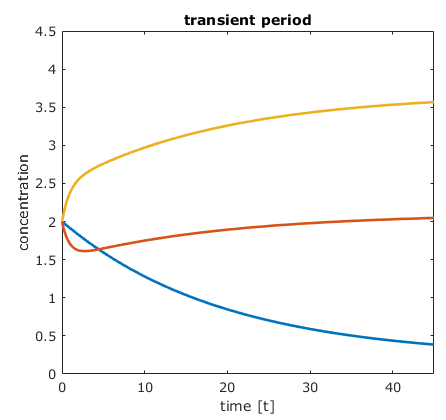 Concentration plot of metabolites A, B and C — try to assign the right colour to each of the respective metabolite.

Concentration plot of metabolites A, B and C — try to assign the right colour to each of the respective metabolite.

Since k1 is ten times bigger than k–1 the concentration of molecule A is continously diminishing until there is much more B than A.

B is replenished faster by A and C than it looses material to C. The small loss to A is almost neglegible.

Since k2 is bigger than k–2 the concentration of molecule C can grow until the steady state between C than B is reached.

You get feedback for each answer by clicking on the button.

The concentration of each compound A over time can be modelled mathematically with an ordinary differential equation (ODE) which contains the concentrations of all metabolites which can react with A (also modelled with ODEs) multiplied by the rate of the reaction producing or breaking down A.

The complete system of ODEs enables us to describe the flow of material through the network and predict the state of it at any given time. Usually after an initial chaotic phase networks enter a state of balance where all compounds inside the system are produced and broken down at the same rate such their concentrations doesn't change anymore though they are still continously reacting.