“To the right of this entrance, and apparently outside the walls of the temple, was discovered one of the finest specimens of Assyrian sculpture brought to this country. It represent the early Nimroud king in high relief, carved on a solid block of limestone, cut into the shape of an arched frame, in the form of the rock tablets of Bavian and the Nahr-el-Kelb. The monarch wears his sacrificial robes, and carries the sacred mace in his left hand. […] The entire slab, 8 ft. 8 in. high, by 4 ft. 6 in. broad, and 1 ft. 3 in. thick, is covered, behind and before, except where the sculpture intervenes, with an inscription, in small and admirably formed arrow-headed characters. It was fixed on a plain square pedestal and stood isolated from the building. In front of it was an altar of stone, supported on lions’ feet, very much resembling in the shape the tripod of the Greeks.” 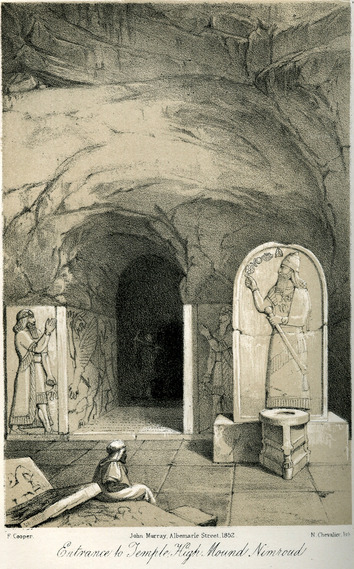