History writing employs a variety of methods and perspectives to understand the past. As there always is a historic component to any discipline, all the different ways to study the U.S. and Canada you encountered on the previous pages are in some way also relevant for history. History can be economic, cultural, social, or political; novels and other literary works in particular bear witness to the past. What distinguishes historians from their academic peers is their ability to interpret and connect the facts they uncover with their larger historical contexts and form a narrative around them. Rather than just producing scientific truth, historians creatively connect events, people, places, and time, and thereby show how complex and multifaceted the past has been. For example, what beliefs and imaginations caused certain actions that produced a specific outcome?

In the presented source material, you will encounter several different historical stances on the international orientation of the United States. Regarding the theme of empire, there have been very contradictory beliefs held in the U.S, which makes it a debated topic among historians. Empires have been powerful historical actors, but somehow vanished from the surface of world history after the Second World War, from which the U.S. emerged as global hegemon. Historians therefore wonder about the connection between imperial thinking and U.S. global leadership.

A typical question for first semester students would be to find continuities and discontinuities in imperial thinking in the U.S. After carefully studying sources, they would then combine their arguments into one essay.

In the following, we are going to focus on the preparatory work that goes into an essay and collect evidence from the sources for two very contradictory theses. Because these theses are political, one might be harder to prove then the other. Keep in mind that with a thesis in mind the examples can be open to be interpretation and do not have to be extremely specific.

“The insurrection in Cuba still continues with all its perplexities.

These inevitable entanglements of the United States with the rebellion in Cuba, the large American property interests affected, and considerations of philanthropy and humanity in general, have led to a vehement demand in various quarters for some sort of positive intervention on the part of the United States. It was at first proposed that belligerent rights should be accorded to the insurgents - a proposition no longer urged because untimely and in practical operation clearly perilous and injurious to our own interests. It has since been and is now sometimes contended that the independence of the insurgents should be recognized. […]

It is now also suggested that the United States should buy the island - a suggestion possibly worthy of consideration if there were any evidence of a desire or willingness on the part of Spain to entertain such a proposal. It is urged, finally, that, all other methods failing, the existing internecine strife in Cuba should be terminated by our intervention, even at the cost of a war between the United States and Spain - a war which its advocates confidently prophesy could be neither large in its proportions nor doubtful in its issue.

The United States has nevertheless a character to maintain as a nation, which plainly dictates that right and not might should be the rule of its conduct. Further, though the United States is not a nation to which peace is a necessity, it is in truth the most pacific of powers and desires nothing so much as to live in amity with all the world. Its own ample and diversified domains satisfy all possible longings for territory, preclude all dreams of conquest, and prevent any casting of covetous eyes upon neighboring regions, however attractive.

That our conduct toward Spain and her dominions has constituted no exception to this national disposition is made manifest by the course of our government, not only thus far during the present insurrection but during the ten years that followed the rising at Yara in 1868. No other great power, it may safely be said, under circumstances of similar perplexity, would have manifested the same restraint and the same patient endurance.

Every West Point class is commissioned to the Armed Forces. Some West Point classes are also commissioned by history, to take part in a great new calling for their country. Speaking here to the class of 1942 -- six months after Pearl Harbor -- General Marshall said, "We're determined that before the sun sets on this terrible struggle, our flag will be recognized throughout the world as a symbol of freedom on the one hand, and of overwhelming power on the other." (Applause.)

Officers graduating that year helped fulfill that mission, defeating Japan and Germany, and then reconstructing those nations as allies. West Point graduates of the 1940s saw the rise of a deadly new challenge -- the challenge of imperial communism -- and opposed it from Korea to Berlin, to Vietnam, and in the Cold War, from beginning to end. And as the sun set on their struggle, many of those West Point officers lived to see a world transformed.

History has also issued its call to your generation. In your last year, America was attacked by a ruthless and resourceful enemy. You graduate from this Academy in a time of war, taking your place in an American military that is powerful and is honorable. Our war on terror is only begun, but in Afghanistan it was begun well. (Applause.)

This war will take many turns we cannot predict. Yet I am certain of this: Wherever we carry it, the American flag will stand not only for our power, but for freedom. (Applause.) Our nation's cause has always been larger than our nation's defense. We fight, as we always fight, for a just peace -- a peace that favors human liberty. We will defend the peace against threats from terrorists and tyrants. We will preserve the peace by building good relations among the great powers. And we will extend the peace by encouraging free and open societies on every continent.

Building this just peace is America's opportunity, and America's duty. From this day forward, it is your challenge, as well, and we will meet this challenge together. (Applause.) You will wear the uniform of a great and unique country. America has no empire to extend or utopia to establish. We wish for others only what we wish for ourselves -- safety from violence, the rewards of liberty, and the hope for a better life.

Competition between great nations is inevitable, but armed conflict in our world is not. More and more, civilized nations find ourselves on the same side -- united by common dangers of terrorist violence and chaos. America has, and intends to keep, military strengths beyond challenge -- (applause) -- thereby, making the destabilizing arms races of other eras pointless, and limiting rivalries to trade and other pursuits of peace.

Today the great powers are also increasingly united by common values, instead of divided by conflicting ideologies. The United States, Japan and our Pacific friends, and now all of Europe, share a deep commitment to human freedom, embodied in strong alliances such as NATO. And the tide of liberty is rising in many other nations.

Generations of West Point officers planned and practiced for battles with Soviet Russia. I've just returned from a new Russia, now a country reaching toward democracy, and our partner in the war against terror. (Applause.) Even in China, leaders are discovering that economic freedom is the only lasting source of national wealth. In time, they will find that social and political freedom is the only true source of national greatness. (Applause.)

When the great powers share common values, we are better able to confront serious regional conflicts together, better able to cooperate in preventing the spread of violence or economic chaos. In the past, great power rivals took sides in difficult regional problems, making divisions deeper and more complicated. Today, from the Middle East to South Asia, we are gathering broad international coalitions to increase the pressure for peace. We must build strong and great power relations when times are good; to help manage crisis when times are bad. America needs partners to preserve the peace, and we will work with every nation that shares this noble goal. (Applause.)

On behalf of the nation, I congratulate each one of you for the commission you've earned and for the credit you bring to the United States of America. May God bless you all. (Applause.)” 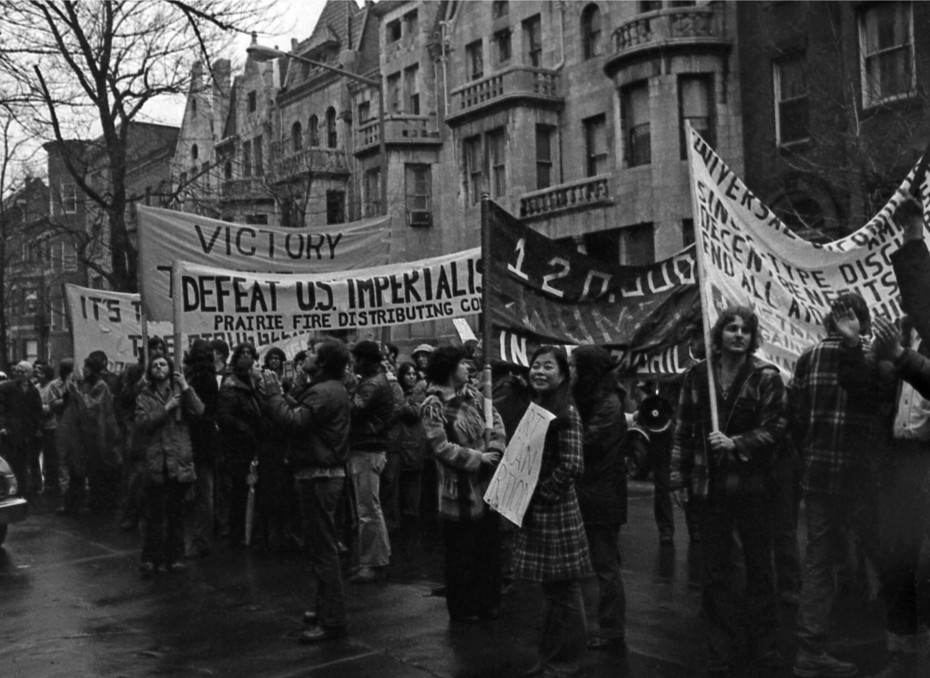 Protest demanding the end of the U.S. occupation of Vietnam

Protest demanding the end of the U.S. occupation of Vietnam

“Its own ample and diversified domains satisfy all possible longings for territory, preclude all dreams of conquest, and prevent any casting of covetous eyes upon neighboring regions, however attractive.” (source 1)

“Today, from the Middle East to South Asia, we are gathering broad international coalitions to increase the pressure for peace. We must build strong and great power relations when times are good; to help manage crisis when times are bad.” (source 2)

“America has no empire to extend or utopia to establish. We wish for others only what we wish for ourselves -- safety from violence, the rewards of liberty, and the hope for a better life.” (source 2)

“The United States has nevertheless a character to maintain as a nation, which plainly dictates that right and not might should be the rule of its conduct.” (source 1)

“When it comes to the common rights and needs of men and women, there is no clash of civilizations. The requirements of freedom apply fully to Africa and Latin America and the entire Islamic world. The peoples of the Islamic nations want and deserve the same freedoms and opportunities as people in every nation. And their governments should listen to their hopes.” (source 2)

“the large American property interests affected, and considerations of philanthropy and humanity in general, have led to a vehement demand in various quarters for some sort of positive intervention on the part of the United States” (source 1)

With the massive decline of other empires, but also traditionally, the US never quite accepted the terminology of empire in regards to their international status. However, this informality and the less coercive means ("empire by invitation") compared to some other empires can distract from some of the imperial realities the U.S. presents. The US ruled for example over Europe after WWII by means of cooperation with elites, fought many disputes about its borders in the realm of the Cold War, and pulled - by invoking freedom - other nations into its global economy and wars.