The scene of Enrollment in Bethlehem occupies the first of the lunettes along the eastern wall of the outer narthex, adjoining the Journey to Bethlehem. Its inscription continues the text of Luke that was quoted in the preceding scene.

At the far left a fully armed military guard stands beside Cyrenius, the governor of Syria, who supervises the enrollment decreed by Caesar Augustus. The governor sits on a cushioned gold throne, his feet resting on a footstool. He wears a military cape, or chlamys, attached on the right shoulder by a fibula, and on his head is a hat which in some respects resembles that of Metochites but which curves forward a sharp point. In his right hand he holds a white cylindrical object (not a scroll), apparently a badge of authority. Standing a little apart and in the center of the scene are a scribe and a second military guard. The scribe, who wears a short, long-sleeved tunic over a full-length garment, holds an unfurled scroll, on which he inscribes the names. The second guard, an older man, holding a sheathed sword vertically beside him in his left hand, takes part in the interrogation. All these representatives of the military authority face towards Mary, who stands somewhat isolated from all the others at the right but on whom all the attention is focused. An unusually tall figure, Mary stands erect, her head bowed towards the officers, and draws her maphorion modestly about her shoulder. Above and to the left of her nimbus is the inscription “Mother of God”. At the far right, with his for sons behind him, stands the nimbed figure of Joseph, leaning forward to assist and sustain the Virgin.

As the two important persons in the confrontation, Cyrenius and Mary are given special prominence in the composition by their greater proportions and dignity and by their placement symmetrically, and alone, before the two tower-like structures. A low wall runs across the entire width of the panel, separating the figures and architecture in the foreground from a more distant building in the far left and a gnarled tree with a single living branch that rises behind the wall to the left of the virgin.

There may be some significance, also, in the apparently dead root of a tree that has put forth a living branch […] the motif of the living root might be interpreted, therefore, as a reference to the prophecy (Is. 11,1): “And there shall come forth a rod out of the stem of Jesse, and a branch shall grow out of his roots”.

Quelle: Paul A. Underwood, Studies in the Art of the Kariye Djami and its Intellectual Background, Princeton 1975. 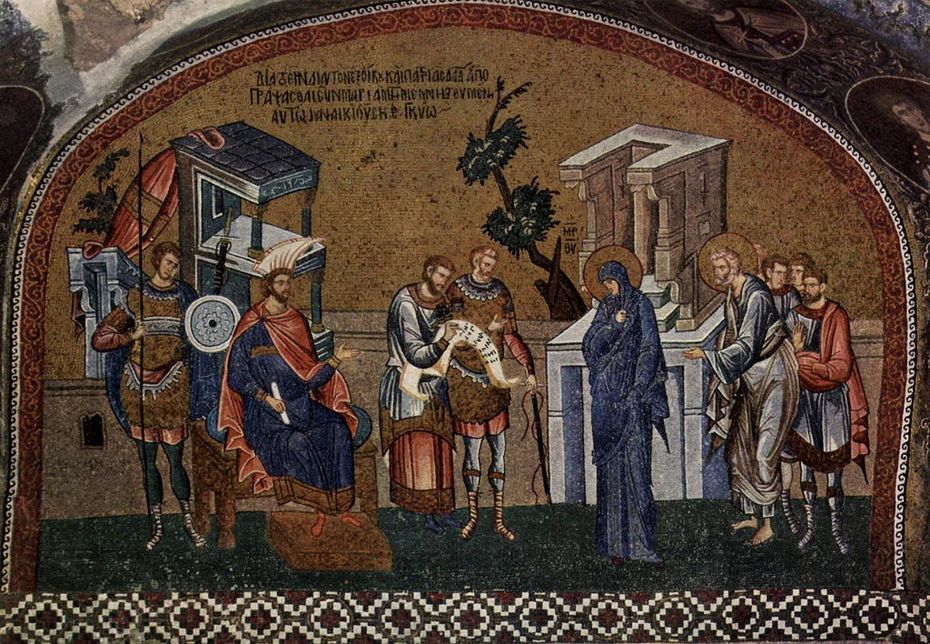